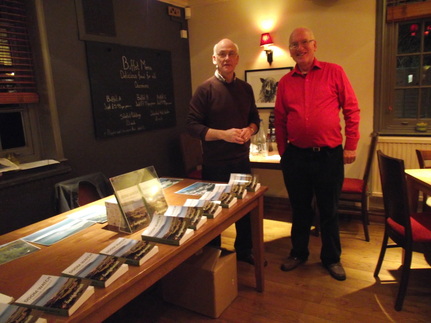 My local pub, the Grosvenor, hosted the first launch. It had plenty of customers but also the space needed. I had friends in local reading groups and made sure they were all invited. I also advertised in the local Library. A friend from my Writers' Circle, Les Williams (left), was happy to chair the meeting.

On the night the pub was fuller than the week before. This added "life" but made it harder to communicate. Some 25 guests turned up, of whom I knew two-thirds. But it made for a party occasion.

I answered questions for half an hour - from Les and then from the floor. Some of these are given in Frequently Asked Questions. I also had some photographs of locations in the story. Then my wife read (or be accurate, bellowed) a trimmed version of Chapter Two of Doom Watch.

Finally, I sat down to sign and sell (at 25% discount) copies of the book. My best customer, bless him, bought four.

But that was not the end. My Writers' Circle put together a Press Release. This led to an invitation to be interviewed on BBC Radio Berkshire by Mike Reed. And an interview for the Reading Chronicle, leading to the article below.
Powered by