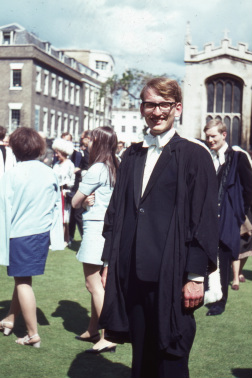 CAMBRIDGE in autumn, with its trees becoming ever redder, was stunning. The five-minute walk to lectures along Kings Parade was inspirational.

Some students were very clever. The lecturers were even cleverer, but not necessarily in a practical way. One had never mastered the art of writing sequentially down the blackboard. For another, proofs stopped where it was obvious (to the lecturer) how they would end - normally about five lines from the conclusion.

I joined and enjoyed the Christian Union, hearing some outstanding talks and making lifelong friends, one of whom is now the main photographer for my various books.

We went on occasional night hikes, climbing back into college over a high wall at the point where a bike was always conveniently abandoned outside.