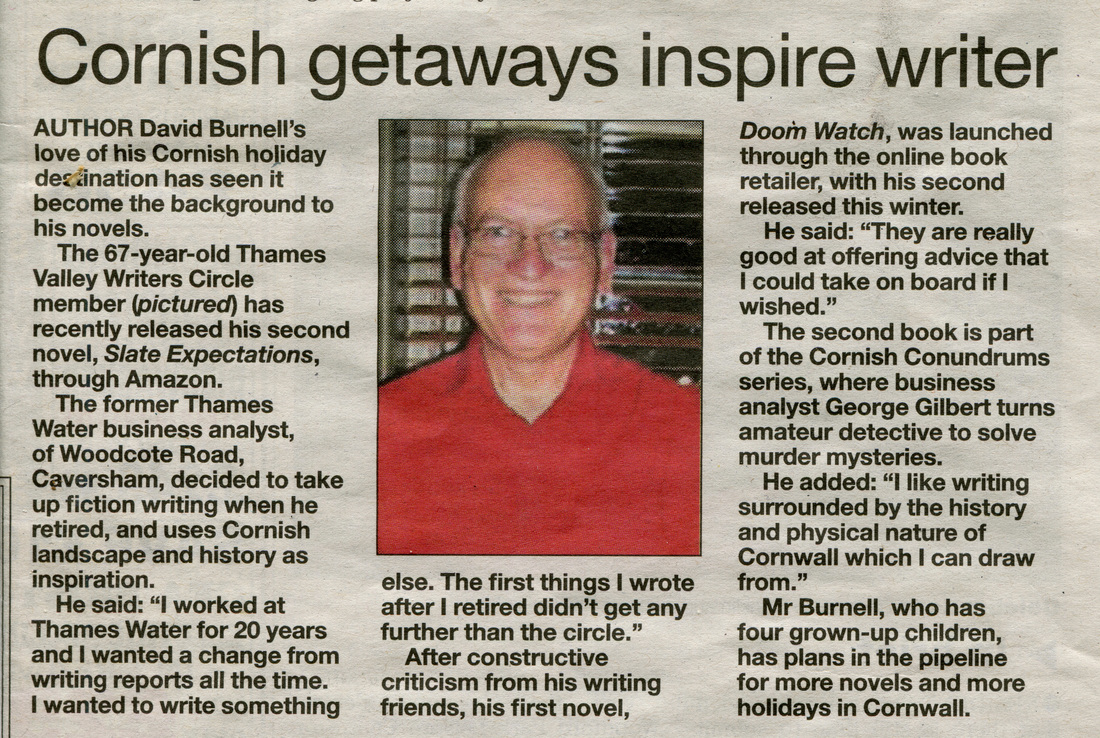 SLATE EXPECTATION was also launched at the Grosvenor, a friendly local pub in Caversham, Reading. One end of the pub had been reserved and staff even turned off the amplifier at that end of the building. Being a Monday night it was fairly quiet. (The previous time it had been a Thursday and all discussion had to be bellowed to be heard at all).

My Writer's Circle friend, Les Williams, led off with a few questions - not the ones I'd suggested but it got the ball rolling. Soon the audience were joining in. I found myself telling the unexpected story of the Delabole Slate Quarry in the nineteenth century. The question was, how on earth could this be linked to a crime set in the present day? Was it easier to write the second book than to write the first? How did a mathematician come to be writing novels at all?

Then it was time for my wife, Marion, to read two short extracts from the book. She had carefully chosen pieces that gave nothing much away about the plot. Marion managed to give the characters different voices and in one case a pleasant Cornish lilt.

Finally I signed a few copies of the book and chatted to the buyers. It was almost ten o'clock before we packed up and came home.

Next morning I was back at work on LOOE'S CONNECTIONS.

By the end of January 2015 I had finished correcting version 2 , having finished drafting version 1 just before Christmas. The overall writing schedule has been interesting.

My first visit to Looe linked to this book was in Feb 2014 - the weekend after "Floods in Looe" were the lead headline on the BBC news. Marion and I were shocked at how unbothered the locals were. There was something of a story here. Dr Karen Morton of Chapel Books encouraged me to set my next book in South Cornwall; I started to read about Looe on the internet.

Over the summer I read a couple of history books concerned with the introduction of Christianity to the UK. In September Marion and I had a week's holiday there, staying in a small cottage virtually on the quay. This was a great week for seeing Looe and observing the impact of spring tides, also picking up some local details. We also walked from Polruan (opposite Fowey) to Polperro.

I then spent two months asking myself what sort of crime(s) might plausibly be set in Looe? I also discussed various issues around the floods and how they might be mitigated with my walking friend, Chris.

In October I came across the notion of "write a novel in November" and decided this would be a good discipline to knock my various ideas into shape. I didn't make it in November but I did write 50,000 words - over halfway! I finished Version One the day before Christmas Eve, as my children and grandchildren arrived for the holiday.  Marion and I were able to read this when we had a week on our own after Christmas, down in Cornwall.

I spent January editing, condensing and expanding Version One. After each bout of editing I would send the book to myself on Kindle and read the whole thing in a different format. It's astonishing how many errors you can spot when the same text is laid out slightly differently. It also saves on printing costs - I reckon about £5 per copy.

The most strategic changes were to cut out everything I could in the chapters leading up to the death (one was lost entirely); and conversely to expand the account afterwards. As we chatted, Marion had observed that several important links that led up to the conclusion did not feature in my Version One at all. These had to be thought through and added in to complete Version Two.
Powered by