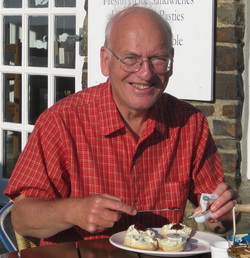 When did you start to write novels? In 2009. I retired from Thames Water in 2006, completed my PhD in 2007, bought and helped my wife set up our holiday cottage in North Cornwall in 2008 then started my first novel in late 2009. I didn’t have the time or the energy needed for writing whilst still at work.

Why did you choose to write fiction? By the time I retired I’d had over thirty years of writing reports (in their hundreds) for management and papers for conferences, every one peer-reviewed, followed by umpteen rewrites of my PhD thesis. I’d given the water industry and its problems my best shot. I was ready to try something else.

Why did you go for present-day crime fiction? My favourite reading was always crime stories. I’m a mathematician; mathematics is about recognising patterns and solving problems. Analysing and solving a crime - finding out how someone was killed, why it happened and then who was responsible – has common elements with this. Crime is a genre where logic is as important as intuition. And the present-day seemed the simplest place for a new author to start.

Are your characters based on real people? Not too closely. My problem is that I don’t know many murderers; or their intended victims. One of my books’ heroes, George Gilbert, is a mathematician/management scientist.  I was such a person and worked with many others, so I know their methods. In my books the plot comes first; then I ask what sort of people will make it work.

How do you cope with writing about women? I had some resourceful female colleagues, so I know their professional approaches. Its harder, though, to generate all-female chat. My wife has a good ear for how people talk and is a vital critic and contributor of my first drafts. I’m hoping I will improve with time.

What inspires your plot-generation? I begin with an issue that relates to Cornwall, so the plot will naturally be set there. I try and imagine some well-motivated crime(s) which might relate to this in some way. I want my readers to agree that the core idea is strong and hangs together. The plot then drives the characters needed. I also need ways of bringing my non-Cornish heroes into the action.

What’s your book-writing schedule? My target is to write a book a year. In September I take a new notebook and jot down ideas and possibilities. I don’t screen out anything; and I give this several weeks. I also do research (mainly via the internet) on possible locations and crime mechanics. Gradually I narrow down key ideas. I think through the details of these various events; how they might leave a trail of evidence; and how, eventually, they might be linked together. By December I’ve an outline plot (though the climax is often vague) and I start to write. 2000 words/day is manageable. My goal is to have version 1 ready by March, to be shown to my “critical supporters”. Refinements continue till May, with publication soon after. I want copies for sale in Cornwall by high season.

How well do you know Cornwall?  Cornwall was our first summer holiday after we were married. We bought bikes, caught a train to Cornwall and got out in the rain at St Austell. From there we cycled down the south coast to Lands End, then back up the north coast as far as St Agnes. Later we had many holidays in Cornwall with our children. When the chance came we bought a small cottage in North Cornwall. That enabled us to see the area in all seasons; and to explore it in more depth. I wouldn’t claim to know Cornwall like a Cornishman; but I do know it better than most casual visitors.

Why not be conventionally published?  I tried to be. I chipped away at my second and third books, improving steadily (according to my supporters). Then, at the Bristol Crime-Writing Festival, I opted to “speed-date” three professional agents, with chapter one and a book synopsis. I learned agents have a pattern that a new crime author has to match: the corpse should appear in the first two pages and the detective in the opening chapter. Any books published should be able to compete with established authors on an airport bookstall. One of the agents took on just three new authors a year. Given that even John Grisham approached fifteen agents before someone gave him a chance, I decided that for me, at my age, the odds were too long.

How does one become self-published?  A fellow speed-dating author suggested I should try CreateSpace.  I took no notice, but did compare self-publishing companies on the internet. These would all require me to spend several hundred pounds to have my manuscript edited and a cover fashioned for a late-entry into the book-marketing race. Or there was e-book publication; I bought myself a Kindle (and used it to read interim versions). Finally I tried CreateSpace - a subsidiary of Amazon. The lack of human interaction made it a slog but the steps were laid out and doable – and cost me nothing.  Finally, after three weeks slog, came the glorious day when I received, from South Carolina, my first “proof” of Doom Watch. A week later the book was listed as on sale – and also on Kindle - from what I believe is the world’s largest book supplier.

Snags and virtues of self-publishing?  Conventional publishing sets the bar astronomically high but self-publishing sets no bar at all. So I tried to make myself a sensible hurdle. I only went in for publication on my fourth book; and as with the earlier ones, I made sure it had been reviewed (and sequentially amended) by eight independently-minded supporters. But on the plus side, I am now selling direct to the public, unfiltered by an agent. And the same channel will work for all future books – a strong incentive to keep on writing – and maybe, one day, to catch a publisher’s attention. (And I like to think it would make a good TV series set in Cornwall)

Advice for budding authors?   Begin with what you know. If you’re a historian set your book in the early Middle Ages, but, if not, start with the present-day – and in a place you know well. One can't write a crime novel without good planning and research on key elements. Once you’ve started, persevere: force yourself to complete version one - and show it to critical friends - before embarking on a rewrite or a prequel - or, hopefully, version two. Take all comments as being ‘mere suggestions’ - but accept as many as you can. Aim to write not just a book but a series: book one is simply getting into the swing of it.